Charlie Gage is a filmmaker who works both on traditional Hollywood projects as well as more personal documentary projects. Most recently he created Inspired: The Voices Against Prop 8 an “accidental film” he made from shooting footage of events surrounding the controversial California Proposition.

Grzelecki & Galvan created a VR Installation Project featuring a movie theater screening Gage’s works and included a Camera Dispenser so individuals can also roam in the physical world or virtual world, record video, and add it to their YouTube playlist.

When the curators asked Denmark’s great lover of color, video, and vibrant, immersive experiences why she created these works Tureaud told them that she doesn’t believe in an afterlife, and so you have to create your fantasy dream experiences here and now, so she uses virtual worlds to bring those mental images into existence.

The curators created a garden maze featuring videos of her work.

The curators created a 2-story installation on Goldflake’s work: the bottom floor a showcase of her often dark visions, and then on the 2nd floor, a much brighter amusement park.

The Poubelle Twins, Fifi & Bibi, began their careers in the world of performance burlesque as French Maids and later evolved into Mexican Luchadora Wrestlers. Wrestling for the past 10 years, the Poubelles have found the physical intensity and injuries to be be significant as they move into yet another phase of their work as typified by their recent Slapping Booth, where paying customers instead of receiving a kiss from the “lovely booth attendant receive a slap on the face.

Impressed with the twins’ power and courage, the curatorial team felt that the possibilities for them are endless, that they don’t seem to have a ceiling or limits.

Curators Ogawa, Lopez & Tran wanted to work on a performance artist and were excited to discover what a “Performance Calligrapher” was. In the USA with an “extraordinary ability” visa, Aoi Yamaguchi wants to be a liason between Japanese and American culture, combining aspects of both cultures with fashion, video, photography and live music.

3 work cycle performed in New York:
• Trace of Nature – circle of life
• Reunited with Nature – our journey at the end of life
• Infinity with Nature – the process of life and reincarnation

Ogawa, Lopez & Tran took her Reunited With Nature project as the inspiration for a virtual installation. They created an interior space with tatami mats and garden elements which signify reuniting with nature. On the 2nd floor is a simulation of her working and performing environment. They created an open balcony where you can see the ground floor garden below. 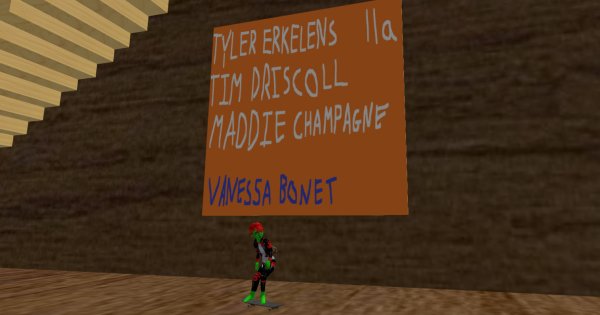 Born in Pittsburgh, raised in Florida, college at Arizona State where a professor guided her away from her lifelong passion for art and to anthropology. About 10 years ago Vanessa Bonet moved to Los Angeles to once again pursue art. Her sculpture and installation projects explore what people find scary or shy away from. Prime example: her 10′ tall Clown Sculpture, “Sprinkles.”

Because so much of Bonet’s work involves fiber arts, Erkelens, Driscoll & Champagne created a giant spool of thread for their Vanessa Bonet space and installed a fashion runway inside where they exhibit her wearable art.

All art is identity art. Through the practice of Social Production, I hope to make work that is a bit less about the artist and a bit more about empowering participants to explore and express their own identity. View all posts by Glenn Zucman