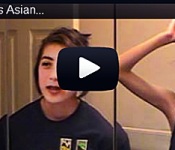 There are a lot of freshmen at Long Beach that consider going into film and many that would never consider it. Being given the opportunity to get behind and in front of the camera offers the rare chance to experiment with the film industry. And this week did not disappoint.

Whether it was funny, fun, dramatic, or bizarre, my Art-110 students entertained on a level all their own. Most enjoyed it, some did not, but the end result was a great start to last Monday. Here’s a taste of what I was looking forward to grading last Monday.

A little drama, some laughter and a lot of fun definitely helped me crack a smile before 12 last Monday, which is a rarity, believe you me. Most students claimed it as one of their favorites, some were a little confused, and even fewer said they would never do it again. But as a part of a school that has such notoriety for its film program, it’s good to get a feel for what our fellow students have going on. Even better for opening up to different majors and opportunities.